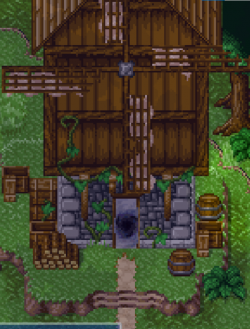 The party must consist of 3 people.

Before you go into the dungeon the three of you would need to have around 60-80 bread 40-60 water jugs and 40-60 potions in total. You can split them up among yourselves however you like since trading is still possible within the dungeon. These consumables can be replaced with roughly the same amount of healing (5 water jugs can be replaced by 3 honey teas and 5 bread can be replaced with 1 grilled cheese, etc.), however it should be noted that grilled cheese will most likely fully heal your characters and waste a bit of healing. Each character should also have at least a full set of blacksmith gear with decent modifiers (ideally defence, but health and resistance are fine too).

Get the quest from the dizwin in the town inn and get it to the stage where it requires you to pick up salt piles.

This guide was tested as a Warden Ranger Sage combo, but all other team compositions should do fine too.

In the first couple or so rooms there won't really be any dangerous enemies, however even rats may pose a problem if you get into a fight with too many of them. The ideal way of tackling these would be either going through enemies one by one or just trying to run through them. With half-decent gear this part of the dungeon can be beaten by one person so it should not be a problem for three people to fully clear it. The way up is blocked by a ledge you can only jump down from the other side, so there is no point in going there. The room on the left features 4 dishes which will be needed for Rat King but for now it is essentially a dead end, so the only path that's left is down. If you continue going down untill the dead end, that room will have two things that are not rats, which are cheese and a chest. You can safely pick up the cheese, however the chest is a mimic that is significantly harder than rats and most likely is on par with some of the later dungeon enemies. Most of the chests in this dungeon are mimics, the ones that are not will be specifically pointed out. When you've picked up the cheese, go back to the crossroads and turn right.

The next set of rooms feature Warrior Skeletons, (those are a bit more challenging enemies than rat,s which might be a problem if getting into a fight with a lot of them at once but again, an experienced player will still have no problem doing everything in this section right up to the final battle in this section). From the beginning of this part, you should heal up between any battles and ideally let your stamina regenerate. After you go right enough, you will get to a room that has down and up exits. The hallway up is blocked by skeletons that don't move and require you to initiate a fight with them by interacting. The way down is a dead end that only has cheese, so after getting it you can simply go up to the skeletons guarding the passage up. Warning: the "skeleton wall" is most likely the hardest fight up to this point and even though it is the weakest miniboss encounter of the dungeon it should not be taken lightly. Fully heal before and prepare for a fight with three Warrior Skeletons at once. There really is no strategy to them other than trying to kill them one at a time rather than splitting your attacks between several of them and going back whenever you get to low hp.

After you pass the first skeleton wall another type of enemies starts appearing - the Skeleton Mage and a bit later in this section there will be Spiders. From this point even small battles will require you to group up and attack all the mage skeletons in the fight before going to other enemies, restoring health and mana in-between fights becomes increasingly important. Remember to focus the mages first since the damage they deal is much bigger than damage from the warrior skeletons. When you reach a different "skeleton wall" blocking the way up - fully heal, have everybody have their class skills equiped with fireball on the other slot (except if you have only 1 ranger, then the ranger player should equip fireball and healing spring spells) and prepare for a hard fight. This fight can be one of the hardest in the dungeon. Please note that while this wall is optional, it is very beneficial to clear it since it is guarding Golden Chest. the fight consists of 4 enemies - 2 Warrior Skeletons in the front and 2 Skeleton Mages in the back. As with all the fight in this dungeon your main priority is killing the mage skeletons as fast as possible. This fight will require tank juggling: in the beginning of the fight you should have the person with the most hp and defence stay in the front and the others get back in the beginning, as soon as the tank has to heal, he heals and steps back and another person steps forward and starts taking damage. Cycle through your party like that with everybody tanking in order and you shouldn't have problems with even the most difficult fights. After beating the wall you will see spiders in the dungeon for the first time, either run through them or just fight them. Proceed to the Golden Chest. After you get it return to the previous big room and prepare to head left.

Going left there will be a few rooms that look like storage and those will have spider enemies that are probably the strongest non-boss unit apart from the mimic. They do not deal that much damage but they are quite a bit tanky, so try not to fight a lot of hem at once since that might just drag out the fight for a tad bit too much. After that you will have a lot of skeletons of both kinds in a few rooms, if you follow the right wall you will first go into a corridor with skeletons and cheese, the next corridor will have an entrance to another zone with a couple of skeletons of both types in the top left corner there will be another entrance to the first actual boss of the dungeon. Fully heal and prepare for a really difficult fight. This is mostly and endurance battle with the Banshee that deals a lot of magic damage and 4 Skeletons that deal physical damage. Have all party members pick the healing spells with your class abilities and start the battle. First deal with the minions, 2 party members dealing with the minions on the left and the last person dealing with the ones on the right. After all skeletons are dealt with start tank juggling the Banshee. She deals magic damage, so resistance is better against her than defence. Note how much damage she deals on a normal hit and get back when you have twice that amount or less hp. Remember to heal and the fight should be doable. The gear that Banshee drops has a gem slot (except Tanrican Ankh, which has a random second stat), so you can equip it with gems and focuses. Note, that once you incert the gem, you cannot take it out and it can only be replaced with other gem, destroying the original gem in the process.

If you have completed the quest and aquired the Iron Key, go through the door with a lock and proceed until you see a room with a big warrior skeleton in the middle and gold skeletons on the outside. Clear the Gold Skeletons first, since if you don't, the remaining alive skeletons will assist Lord Noctis in the fight. The battle with the boss is essentially the same as the Banshee, Noctis deals a lot of physical damage twice. As usual fully heal and start the fight. The fight depends on how many Golden Skeletons you've killed. The optimal ammount of Golden Skeletons to leave alive (for a party of 3) is 2. If your team is smaller than 3, it's better to leave no Golden Skeleton alive before the fight.

after that there isn't much to do in the dungeon apart from the last and strongest boss - big rat, jump down the ledge that was blocking your path in the beginning to get back to the start of the dungeon and go into the left room. come to each of the dishes and interact with them to put cheese on them, after all 4 have been put a short cutscene will start in which the rat boss will appear, he has no minions but deals a lot of damage and has a lot of hp, once again try boss juggling and healing as much as you can, with basic blacksmith gear he will deal 10 damage on a normal hit and 20 damage on a crit, so you shout get back as soon as you get below 20 and ideally as soon as you go below 30, other than that there is no real strategy to this boss, you just hope you don't get unlucky. After you kill lord noctis, banshee and the rat boss you can simply exit the dungeon, now you can either reset the dungeon using the pedestal or go to the town to sell your loot.